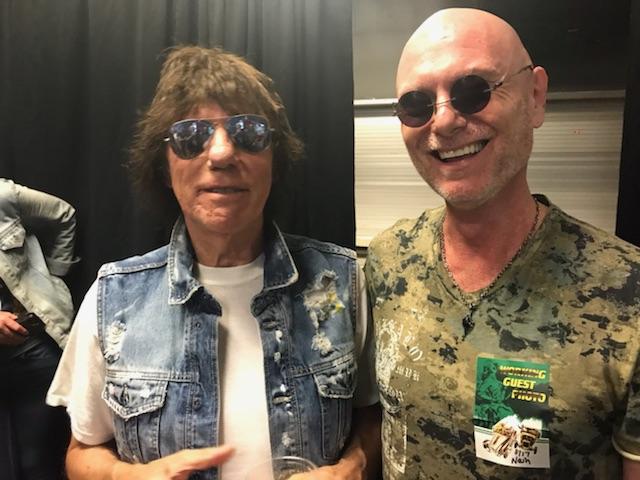 Bcak in my early teens I used to hang with older seasoned musicians, a few of them took me under their wing. I remember vividly being invited to a weekend jam at a good friend’s garage, this young kid of 14 was floating on a cloud! They broke into the Jeff Beck Group’s tune “Situation” and their lead guitarist at the time yielding  a Stratocaster was a powerful soulful player. He taught me that intro riff and from then onward I was hooked on everything Jeff recorded. I was extremely fortunate that a good friend was a photographer for Jeff and invited me backstage to meet Jeff just a few years back in Nashville. Jeff greeted me with warm and friendly vibes, a totally unforgettable moment in my life. I always try to do my own thing artistically but there’s no denying I carry Jeff’s influence every time I walk on stage. I am extremely honored and will carry his torch of inspiration forever onward*

In September the Fall of 2021 I received a phone call from Henry Paul that he needed a guitar player for the Outlaws, from that point on it’s been a whirlwind!  Aside shows with the Outlaws it also became shows with Blackhawk as well since we’re 2 bands in 1. I am out there with my childhood Southern Rock heroes getting to play my heart out every single night, a sheer blessing!

From the fall: Richard Winham presents Jimmy Dormire - guitarist, singer and songwriter - from the virtual Jazz in the Lounge Series, streamed at Chattanooga;s Barking Legs Theater!

Raised in a music-friendly household in Michigan on a diet of country music—his father’s preference—and Motown soul—his mother’s preference—along with rock, Jimmy Dormire has forged a remarkable career as a staggeringly versatile and articulate guitarist who is comfortable in many musical realms, including jazz, blues and funk.

Dormire received his formal training at the famed Berklee College of Music in Boston, and after relocating to Nashville in 1990, he honed his skills playing with country and bluegrass artist Clinton Gregory.

However, his most prominent gig was a 14-year run in the outlaw country/Southern rock band Confederate Railroad, and Dormire recalled one of his most humorously memorable performances with the group in Chattanooga.

“They brought us in on a boat from the backside of the big stage,” said Dormire, about Confederate Railroad’s 1995 Riverbend performance as the main headliner, which garnered the festival’s biggest attendance at the time of over 100,000 people. “I was scared to death to say the least; my knees were shaking.”

“We would do a guitar change on our hit ‘Queen of Memphis’ which is a baritone instrument,” said Dormire. “As the tune was counted off, I went to play and nothing came out.”

“I had not plugged the guitar in!” said Dormire. “Our leader Danny Shirley just made a joke out of it, but from that point on, that tune with that guitar was a mental joke.”

More recently, Dormire could be seen on the television show Nashville for several seasons as a member of character Luke Wheeler’s band, and in 2015, Dormire frequently played alongside the late surrealist and jam band forefather Col. Bruce Hampton.

“Colonel Bruce brought about a total awakening within my playing, a no-holds-barred feeling of freedom to totally express my inner soul as a musician/human being,” said Dormire. “He set my playing free aside from teaching me about life in general from a cosmic universal perspective.”

As a young, budding guitarist, Dormire admired guitar legends such as Chet Atkins, Jeff Beck and Ritchie Blackmore and took deep dives into blues, jazz and bluegrass.One of the most influential music encounters for Dormire as a teenager was seeing the Mahavishnu Orchestra guitarist John McLaughlin in his group Shakti in 1978 and meeting him backstage.

“There was a deepness and intensity of that show that was unearthly, as though the musicians were reaching to such a high place beyond, a place in which McLaughlin referred to as the ‘Floating Point’,” said Dormire. “John taught me my most valuable lesson, not in notes learned but that of musical prayer, playing ‘To The One’. Of course this led me to John Coltrane as well.”

Dormire carries a torch for saxophonist Coltrane’s spiritual jazz today, heard in his various interpretations of Coltrane’s compositions such as the emotionally adoring “Naima” and “Acknowledgement” from the masterpiece A Love Supreme, and Dormire’s current trio, Peace Merchants, centers on jazz and blues with ample opportunities to spotlight Dormire’s improvisational prowess.

The “flowing positive chemistry” of Peace Merchants features drummer Ward Wilson and bassist Gary Hicks, and the trio takes its name from one of Dormire’s original compositions off his debut solo album Premonition, which was an anthem for peace.

“I’ve always wanted to create a band with a positive underlying message within our music, healing and peace,” said Dormire, in advance of the Peace Merchants’ January 31 show at Barking Legs Theater.

As a songwriter, Dormire cited some influences that may not be obvious, such as “the avant-garde blues of Chris Whitley and the spiritual peace of Richie Havens,” and a more recent discovery for Dormire was the work of Nick Drake.

“I can’t get enough of his art,” said Dormire about Drake. “I hope through osmosis I can absorb this subconsciously within my songwriting. I guess I’m an ol’ folkie too at heart.”

“Underlying guitarists who have a deep impact on me still would be Pat Martino and Tony Rice alongside the legato aspect of Allan Holdsworth,” said Dormire.

“Also I may add I have a huge love for the Western swing players Leon Rhodes and Grady Martin. When playing traditional country, I always carry their spirit with me.”

Regarding advice for aspiring musicians, Dormire has some simple yet penetrating words.

“Follow your heart and stay inspired,” said Dormire. “Inspiration comes in all forms, all directions. Be yourself and keep reaching. Music is thee universal language that crosses all borders. Galaxies!”

I'm very excited to introduce  my new trio PEACE MERCHANTS featuring Ward Wilson on drums and Gary Hicks on bass. We're a  bluesy/funky/jazz mixture of special homages and originals with our own artistic signature sound. We're gearing up for the studio alongside performing in and around the Chattanooga, Atlanta and Nashville region. Look very forward to performing at your private event, festival or venue!

I was very fortunate to be a guitarist in the Luke Wheeler Band for "NASHVILLE" seasons 3,4 and 5.  A total thrill and honor to be involved with such a precision team of actors, film crew and musicians, an unforgettable experience! Please enjoy these video performances!